So I was looking for something to do a few weeks back while waiting for a ride and I decided to buy a copy of Dungeon Scrawlers. I meant to try it solo after checking out the components, but my ride got here too quick for me to do that.

A week or two after that I knew I was going to hang out with my wife and my friend Dan at his place and figured it would be the PERFECT time to give it a real shot. ...I forgot to bring it.

It wasn't until after filming for the anniversary sketch was done that I got to play it. Honestly, I hadn't even expected Seth and I to really play it, but was super happy that we wrapped up filming early and got to have some fun.

The Game: So I have to stop for a second before I describe the gameplay and talk about the components. I really, really liked unboxing this game. The laminated maps seem good and sturdy, the class tokens are pretty thick, and the markers have nice chunky erasers attached to the caps (take note Rolling Realms). The rulebook is also super cute. It looks like one of the notebooks you'd use in high school. You know, the ones with the black and white speckled cover. There are some really sweet margin doodles too. I really like fun stuff like that in my games, just like the coffee stain on one of the consoles for Space Cadets: Dice Duel. Really, really satisfied with component quality.

As for how to play the game itself, each of the players is handed a copy of the same maze, a class token, and a dry erase marker. Your class token changes how you interact with or score certain parts of the maze. For example; Normally to defeat an enemy you need to fully black them out with your marker, but if you're the Barbarian you only need to black out their head. To score a spell you normally need to trace out a pattern but as the wizard you only need to draw a line through it.

Each player begins at the start of the maze and tries their best to score as many points as possible before the end of the round. You need to keep your marker on the maze at all times. If you enter a room you need to interact with everything in it. Every challenge you fail in a room is worth no points, but every challenge in a room you fail to interact with is worth negative points. Whether you properly interacted with a challenge can be up to strict scrutiny. You left a little yellow outline on the treasure chest? No points. You go into a room and forget to outline a treasure chest at all? That's negative one point. Some maps have multiple starting areas, some maps have portals between smaller maps, some maps are even played against a timer. Get as many points as you can on your way to the end of the map and see how high you can make your score!

My Playthrough: Now I haven't actually played a game against Seth in quite some time and that's a bit of a disappointment. Even though we mostly play Magic I just enjoy playing games with him. He's honestly one of my favorite opponents and it's pretty easy to explain why. Playing against him is always a delight. If I win, I have a good time. If I lose, I have a good time getting there. He's a good sportsman and a joy to play with. Even when he beats me. Like a butt.

So did he beat me? Yeah... I guess... If you listen to numbers. I've always thought that numbers could fib though. Like they did in the first and second round wherein Seth absolutely crushed me. He totally flattened me, but I still had fun getting there. .... Although not as much fun as I had during the third round where I finally won one!!! He might have won the war, but twas I who won the battle!! HA HA HA HA HA!!!!!!

Yeah... I lost... But playing was a blast. I've always really enjoyed real time games and this was no exception. Here's a look at what these mazes look like when they're filled out. 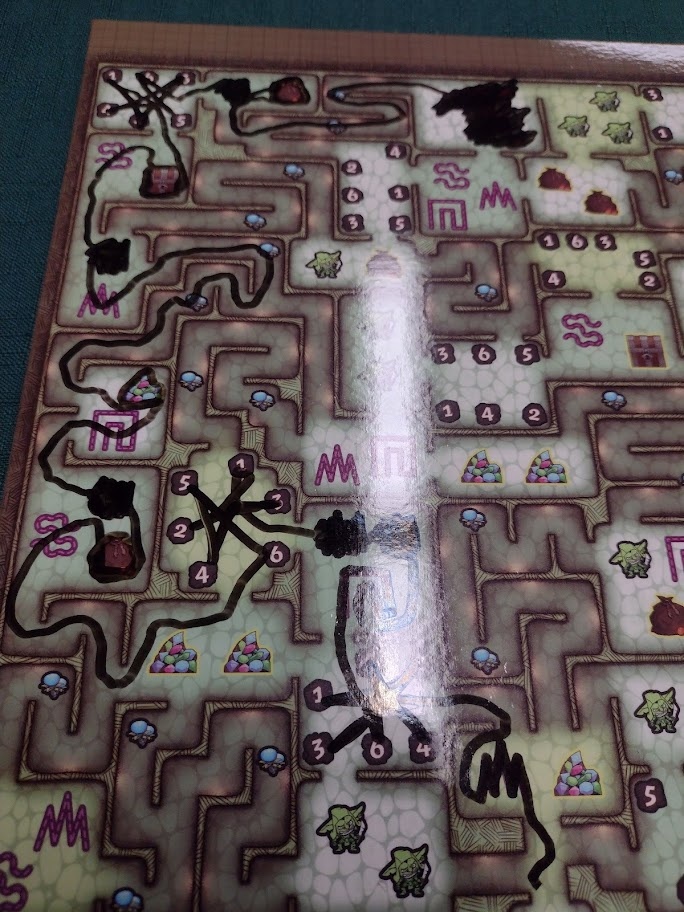 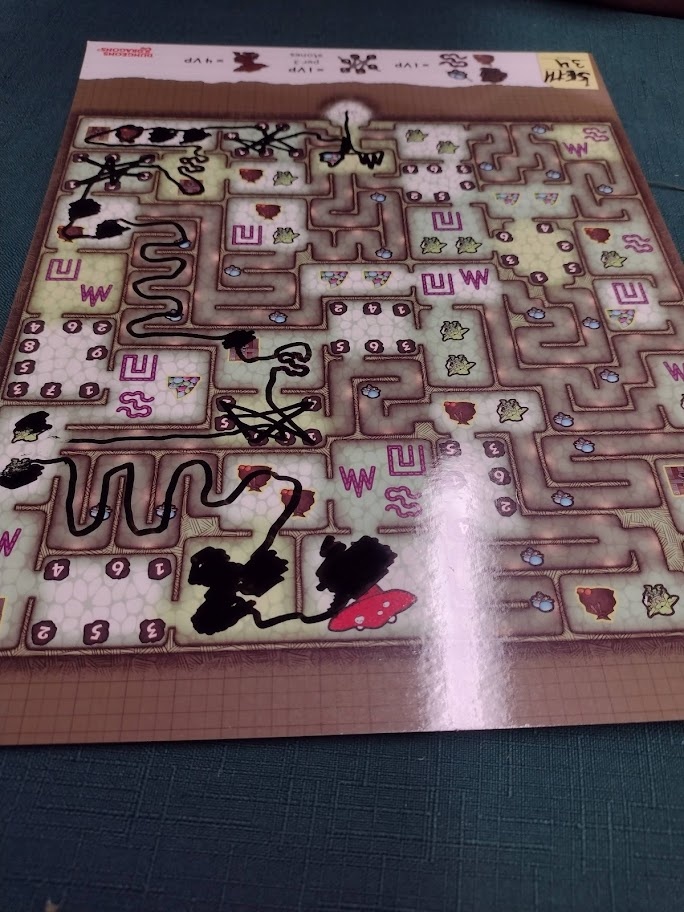 My Thoughts: I've always liked real-time games. There's something about how frantic they are that's appealing to me. This one is a lot of fun but compared to some of the real time games I've played it's fairly subdued. While something like a Space Cadets: Dice Duel is a half hour heart attack, this is merely a little tense. I'm quite happy it's on my shelf as a quick game to pull out when I want my hands to really do the gaming instead of my brain.

Pros: The concept of this game, the components, and the theming are beyond great. It looks good, plays smoothly, and is a load of fun. If you have a group of people that can handle real-time games, this is a great way to pull out something quick. Even one of the people I've played this with, who doesn't like real-time games, likes it. It may not be super complex, but it is super fun.

Cons: While I love how sturdy the maps are, I feel they could be a bit larger. This is really the only complaint I have about the game. It would require some rebalancing of the elements as spell-casting lines and treasure outlines would need to be smaller. It's just a nitpick, I know, but I have to come up with something.

Overall, I have no regrets about getting this game. It's quick, fun, easy to explain, and has a TERIFFIC price point. I look forward to the inevitable map packs that Wizkids comes out with.

Catch you on the flip, Zip!
-Bubba