Multiball! Multiball! MULTIBALL!!! There may be a lot of pinballs flying around, but how does this game stack up with only one player?

Full disclosure here, I've never played a solo game before and I had some pretty mixed feelings going into this playthrough. I've always identified as a social gamer and play most of my games at parties or get togethers. I've only ever really seen board-gaming through that lens, specifically as a way to connect with people. That social aspect is what brought me to gaming and it's why almost all of the MtG I play is multiplayer.

I guess I've also always seen solo gaming as intimidating. I'm really not great at reading rules and always benefit from having someone explain them to me as opposed to picking them up off of the page. I also feel differently about scoring something like a solo game. Losing to another player, to me, feels more like "I was outplayed" and not "I failed."

I picked this game up about a year ago because Seth recommended it really highly and I love pinball. Like, I /adore/ pinball. I had some pretty big misgivings going in, but I figured, "I already own the game, why not give it a shot?"

One thing I've learned is that when you're playing a game for the first time, you should absolutely use the quick start rules if you can. So I pulled those out of the box and tried to decipher them. I made it about half way through before my brain started smoking and I found a video on YouTube. I feel pretty vindicated that the video explaining the rules for the first board was 25 minutes long. That said, now that I've played it a few times I can explain (almost) everything pretty concisely now.

Let's start with the Carniball player board. 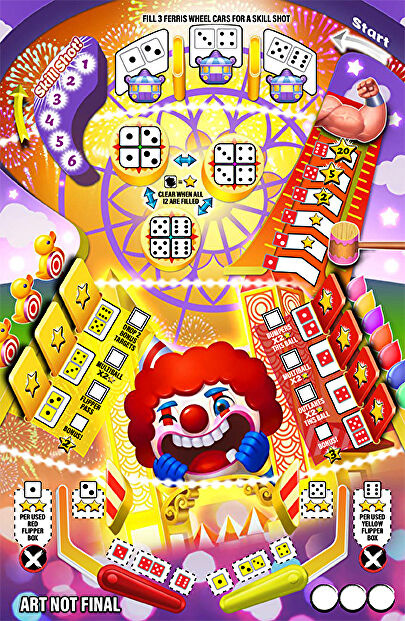 There are four sections of the board as divided by the white dots. Your ball must always move down a section unless it's ricocheting from bumper to bumper or launching off of a flipper. You roll two dice per turn and pick one to use, filling it in where you want to for that section. You can't use something that's already filled in and if a non-flipper section gets filled in, you clear it. If you can't fill a roll in for your current section, you move down. If you make it all the way to the bottom and can't fill a roll in on the flippers, you lose your ball. If you can use the flippers, the yellow flipper can hit the yellow or white boxes and the red flipper can hit the red or white boxes. Simple, right?

The top section is called the Ferris Wheel. When you've filled out all three of the boxes, you clear them and bank a skill shot. A skill shot is a number you can substitute in on a roll. The next segment down is the bumpers. You get one victory point every time you fill in a bumper square. If your last move was filling in a bumper, your next shot can hit the bumper that would be next to it clockwise, otherwise you have to move down for your next roll. In that same section is the feat of strength which needs to be filled in sequentially.

The next section down is two sets of targets which, when filled, give you a bonus. Flipper pass means that for the rest of the round your flippers can target anything. Bumper bonus means that you can go clockwise OR counterclockwise on the bumpers and points from them are doubled. Multiball means that you put another pinball token at the start area and now have to use both dice, one die per pinball, and that points are doubled. Once your pinballs are all gone from the board, you move to the next round and your flippers are cleared.

Once I had the rules sorted I sat down with my game. I was disappointed that I couldn't use the Disco board to start with because it's an advanced board so I had to stare down the barrel of that freaky looking clown. As I was about to do my first roll, my friend Tex and a coworker of his came in to the shop. They were interested in what I was doing so I explained the rules to them as I played. I realized that my playing wasn't totally optimal, but I was still having fun.

I started to really get the hang of the game on my second ball and began really enjoying myself.  I noticed on my third ball that moving the little pinball token around on the board was sometimes smudging the boxes I'd filled and getting a little annoying. By this point I had the rules well in hand and having a pretty good time. Tex and his friend left before I finished, but I think I did pretty okay. I may have only scored 88 points, but the game didn't really give me a frame of reference to work out how well or how poorly I did. I thought to myself, "I'm going to do better next time!" 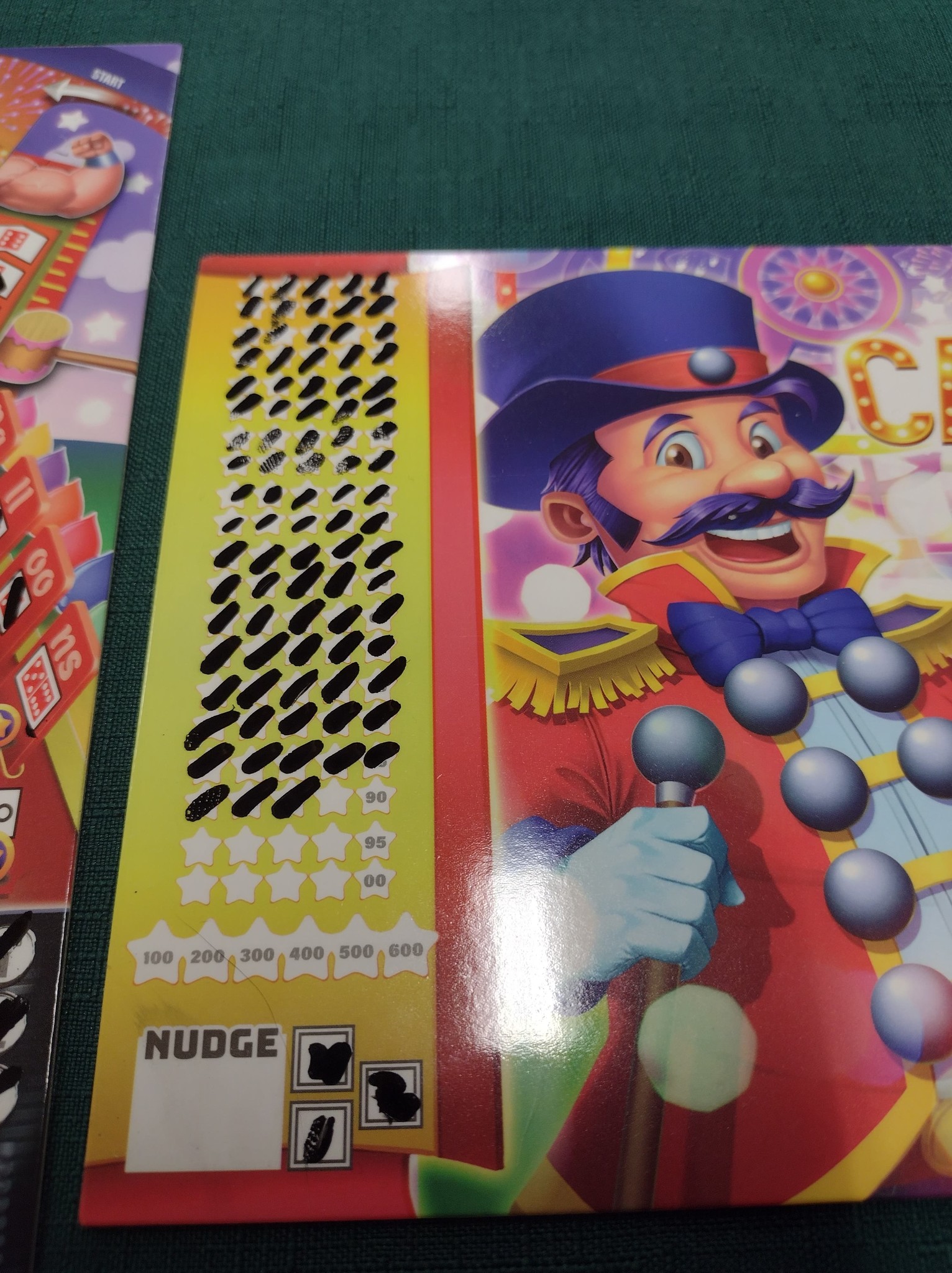 My second playthrough was purely for enjoyment. I sat down and put Pinball Wizard by The Who on the speakers. I used the same play board but set myself up a little differently. For the first playthrough I had the score card above the table so it looked more like a real pinball machine but I learned that doesn't work logistically so I put it on the side for playthrough 2. For round 2 I set myself a goal of finishing the Feat of Strength with a multiball bonus active. I focused on that pretty hard and wound up accomplishing it and having a bunch of fun along the way. I managed a score of 163 the second time which I think was pretty okay, but I want to try and beat! 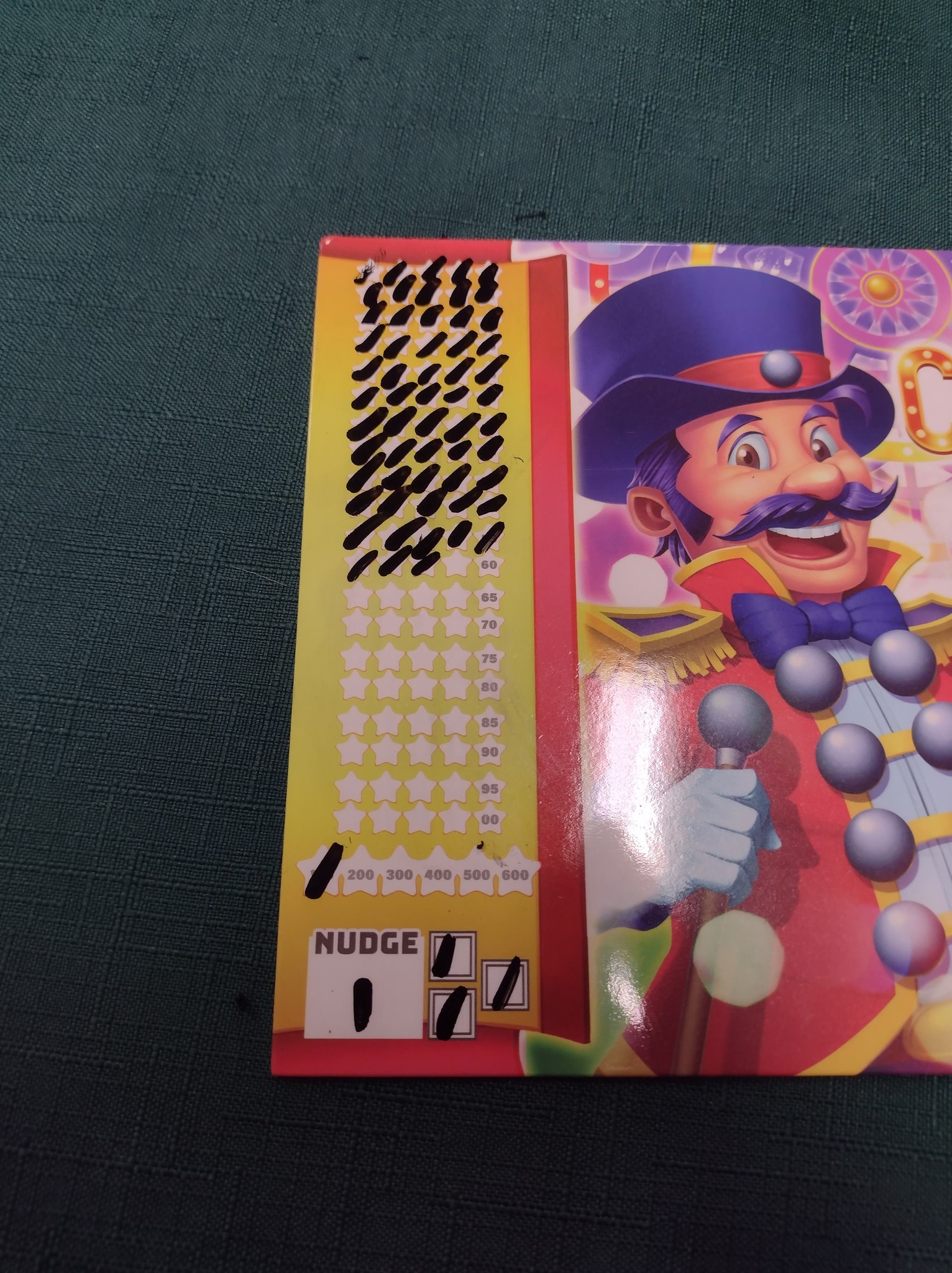 I had the game on the counter at this point and was explaining it to everyone who asked. I got pretty good at going over the rules pretty quick. My wife, BJ, ended up coming in and I showed them and another customer how to play. It's definitely a slower game with multiple players which takes a little away from the "pinball" experience. BJ lost their second ball somewhat early and just ended up using the scoreboard to doodle with the dry erase. Our third player had to leave pretty early through ball number three, but BJ and I finished up.

I really wound up digging this game! Seth said that it was surprisingly close to a pinball experience and I was definitely surprised! The game doesn't give you a lot of choices to make all at once but you can definitely still strategize. There are a lot of little things with this game that are really, really satisfying. Getting both the bumper bonus and multiball going at the same time is SUPER fun. You find yourself really hoping for certain rolls and it's so satisfying when you roll what you're after.

I love the little pinball tokens and the graphic design on the boards is really cool too. I think the fact that it doesn't give you a score chart to see "how well you did" is a really good choice. That way the only thing I'm competing against is my own high score. That feels way better than trying to hit numbers that the designers come up with.

Even though it can accommodate up to four players I really feel this is a solo game. Playing solo had a bit of a frantic feel too it and the anticipation of what you'd roll on the dice was stellar. Adding more players adds waiting. That little slowing down can really take away from the experience. You also add the possibility that one player could lose a ball and be stuck waiting for the other players to finish. Poor BJ was stuck for about 6 minutes doodling.

Scoring feels somewhat inelegant, taking you away from the board to mark a tally. Because the game has elements like the balloon targets that reset and bonuses that activate in the middle of playing you can't really do scoring at the end so immediate scoring is inevitable. Perhaps a good way to make this two player is to have one player be score keeper and then swap off when the three balls are up. I think I'll try that next time.

Some minor component gripes are that the boards themselves don't wipe particularly clean without some kind of solvent like Windex. It's not horrible, but it's an extra step to clean up. I also wish that it came with a score sheet as opposed to a "high score" section on the back of the rulebook. As a seller of used games, components like that irk me a little.

While I won't say definitively that this one has turned me around on solo games, it has certainly showed me that one player board games can be really fun! I hope to make my way through the rest of the boards but don't know that I play enough one player games yet to buy any expansions. ...No matter how cool the Star Trek one looks.

Catch you on the flipper, Zipper!
-Bubba